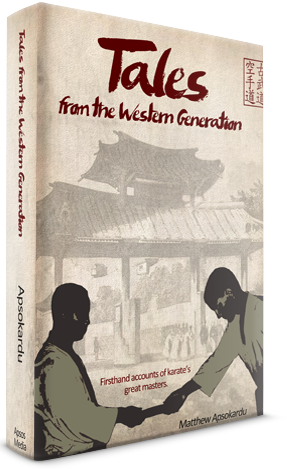 This post marks the official release of “Tales from the Western Generation”! The kernel concept of this book began in 2008, and work in earnest began in 2012. What started as a vague idea to collect interesting stories from influential karateka eventually turned into a work of significant breadth, capturing a moment in time when karate traveled from Japan and Okinawa and arrived on the shores of the United States.

I appreciate your time and attention, and would like to share more of what this book has to offer!

What is Tales from the Western Generation?

The core of “Tales” lies in the 31 interviews collected via individuals of varying karate styles. However, the book also features unique historical study that describes the state of martial arts in the USA throughout the early-to-mid 1900s. To understand the structure of the book, read about the following primary sections:

Section 1 – History of how Eastern martial arts made their way to America. Prior to 1950, Judo was the most popular Eastern martial art in the United States. Despite thousands of Chinese immigrants during the gold rush era, Kung Fu remained a well maintained secret. In section 1 I explore how the importation of various Eastern martial arts effected the eventual growth of karate in the USA.

Section 2 – Interviews with the Western Generation. The crux of the book, this section features over 30 interviews with senior practitioners of various karate styles. The interview guests come from diverse backgrounds and studied with senior sensei in Japan, Okinawa, and the United States. They share a variety of historical insights, philosophies, training tips, and timelines regarding their impact on the arts in the USA.

Section 3 – Conclusions. Using the wide context of the book, I draw certain conclusions about the past, present, and future of karate, applicable to individuals of all styles and skill levels.

Where to Get the Book:

You can get your copy of “Tales” at the following locations:

This article was posted in book progress and tagged book publication, book release.
Scroll up